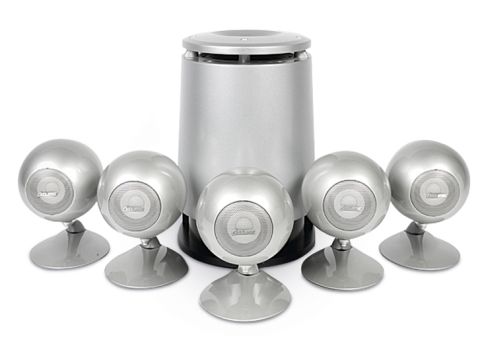 Partner these metal alloy zeppelins with a muscular amp, position them at ear level, favour classical and dance music over rock and avoid excessive volume, and you won’t regret your purchase. If you want more flexibility and bass warmth, audition some alternatives first, however.

Willfully ignoring the maxim that speakers should have a flat baffle, at least two drivers and be vaguely box-shaped, Eclipse collects its 21st century style gold star with ease. But it's not just a case of style over substance. Eclipse's Japanese designers arrived at the ovoid shape to eliminate sound-distorting cabinet resonance, which the TD307 II manages very well indeed.

This futuristic 5.1 home cinema system comprises five TD307 mark II monitors and a 316SW subwoofer. All are constructed from metal alloy and finished in a choice of silver or black.

The unique design incorporates a single 6.5cm full-range drive unit in each monitor which fires forward while the cabinet tapers away behind. The result is a directional and uncoloured beam of sound that images particularly well in stereo. The accurate sound staging works well in a 5.1 arrangement too, although positioning is fairly critical.

The 316SW sub is less fussy about location. Its considerable weight anchors the die-cast alloy cabinet to the floor, eliminating unwanted vibration, while the shape of the cylinder reduces resonance and the production of standing waves. The cone itself is also small at 16cm. The result is fast, tight bass that can be ramped up without distortion and a cabinet that remains completely inert.

In 2.1 mode, the Eclipse is brilliant at handling music on CD. The clarity of the 6.5cm drive units has to be heard to be believed. If you are sitting in the sweet spot, vocals and orchestration sound hyper-realistic.

Switching to multichannel music to bring in the other speakers breaks the illusion a little, although a good 5.1 mix, like The Beatles' Love album on DVD Audio, convincingly fills the room.

When it comes to movie soundtracks, this Eclipse system prefers those that are dialogue-heavy and filled with subtle musical scores. The TD speakers have no trouble separating the layers of the mix and delivering a clean sound. With the action genre, the active sub relishes the explosions, but the satellites can sound slightly tiring at high volumes. They also need a powerful amplifier to beat the bass out of them.