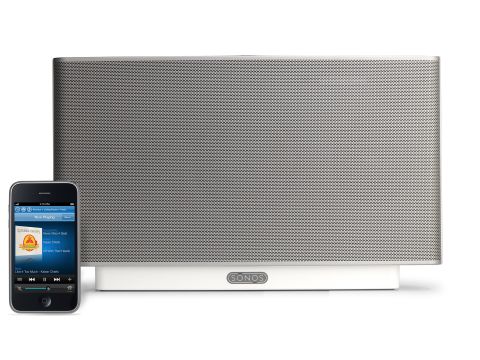 The Sonos Play:5 is expensive and brilliant

Update: The original Sonos Play:5 has officially reached the end of its lifespan. Sonos announced that the speaker will no longer see software updates starting in May 2020. The devices will continue to run old software after that point and function exactly the same as they do now, but after that point there won't be any new features or standards added to the speaker. If you want to upgrade to a newer model, there's the new Sonos Play:5, or even newer Sonos Beam soundbar.

The Sonos Play:5 is the wireless multi-room music system formerly known as the Zoneplayer S5.

The first Sonos music system, the ZonePlayer 100, launched in 2005 – the same year that Apple launched its first colour-screen iPod. So Sonos has been right there at the forefront of the MP3 revolution from the start.

The basic idea of the Sonos Play:5 is that you can put one in each room of your home and wirelessly stream music to all of them.

The Play:5 units themselves have no controls on them, other than volume and mute buttons, which you can also use to get each device in your house talking to each other.

You actually control the players in three different ways; through the desktop PC client (your PC will need to be switched on if you want to play your MP3 library over the system); by using the free iPhone and iPod touch app which works as a wireless remote; or by using a dedicated Sonos CR200 touchscreen remote which does the same thing but costs £279 (gulp) extra.

Which brings us on to a fairly significant point – if you want Sonos in your house, you're going to have to dig deep because it doesn't come cheap.

A setup with two Play:5 speakers, a ZoneBridge to wirelessly link them together and a CR200 remote will cost a bed-wetting £1,045.

So is it worth it? Or is the Sonos a waste of time and money? Read on to find out.