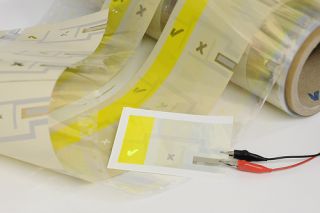 The possibility of one day seeing OLEDs covering everything from food packaging to the sides of buildings has moved a step closer thanks to European collaboration project ROLLED.

The group, made of big names in printing and plastic electronics industries, has made an OLED just 250 micrometers thick, which is around the thickness of four sheets of paper.

It was then covered in a thin plastic film to preserve the organic materials, while still keeping the flexibility of the device.

Although the early test products were fairly basic, they still showed off the potential of the technology. One type saw a green tick attached to the outside of food packaging, and then when opened it changed to a red cross.

Another showed how RFID in mobile phones could be used to power the OLED device, with an EU flag printed on a business card that lit up when a mobile phone with NFC capability was placed near it.

This new method could bring the cost of OLED production down by a factor of 10, which would make it affordable to the mainstream tech world, especially with a higher speed of production.