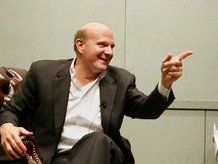 Check out this Windows Whopper!

The British Invention Show took place last week, proving once again that the hottest, most thrilling, most innovative nation in the world most definitely IS NOT Great Britain any more.

The New Scientist reported from the event, telling us that one of the highlights was an iPhone app that lets you turn on your bath while "on the go". Imagine that. Imagine being able to sit at work and remotely fiddle with your bath taps. That's going to knock Thomas Edison off the #1 inventor chart spot, isn't it?

FIRST EVER INTERNET SITE: And you'd think the British Invention Show would have a better website than

The New Scientist's video report also features a man who's made rubber cases to put lemons and oranges in, designed to help you save halves of lemons and oranges from being wasted. So while our Japanese and Korean equivalents are experimenting with carbon nanotubes and organic LED systems, we've got a man in a pink tie making things out of cardboard.

That, ladies and gentlemen, is why the only thing the UK excels in these days is thinking up clever ways to not get caught claiming disability benefits.

A man managed to successfully remove any traces of romance or emotion from his wedding proposal by doing it in Super Mario World. He also ensured the event was rendered as sterile as the cold vacuum of space by videoing the pre-planned moment for YouTube.

In the video, the poor girl is trying to sound like she's moved by the experience.

He will signify he wants a divorce in a few years by beating the prostitute that looks most like her in GTA IV to death.

Earthworm Jim has come to iPhone. This is not good news, sadly. You won't be getting any exclamation marks here. Traditional platform games rely upon precise, lightning-fast reactions. You don't get that sort of thing when you're vaguely splodging your thumb on what you have been led to believe is the right part of the iPhone's touchscreen.

Not that the iPhone's rubbish at games, it just requires something a little more finely-tuned than a twitch-based platform game re-issue.

Is anyone who buys it likely to get off the second level? No. It's a nonsensical nostalgia purchase for people to impulse-get, load up, think about how good it used to be, then feel very sad about wasting money on it when there's proper things to be spending money on and some people don't even HAVE any money.

Something very odd is happening out there in the world at the moment. Millions of people with perfectly fine PCs that work perfectly fine and are perfectly fine, are spending lots of money on buying a new operating system that enables them to do the same things in slightly different ways. We will never understand "the masses".

Of much more relevant news is Microsoft's decision to team up with Burger King to promote Windows 7 in Japan, resulting in the Windows 7 Whopper. It's worked - the Japanese BK site's gone global and is currently struggling under the weight of Twitter traffic.

Despite appearances, the Windows 7 Whopper is rumoured to be less meaty than the Vista Bacon Burger.

CAN I GET A FRESH INSTALL: "Blue cheese of death with that, sir?"