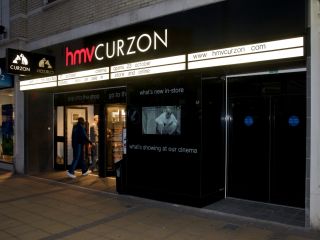 hmvcurzon opens its doors in Wimbledon this week

HMV opens its first cinema in partnership with Curzon Artificial Eye this week, with hmvcurzon Wimbledon cinema opening to the Public this Friday, 23 October.

The HMV store-cum-cinema in Wimbledon features a brand new three-screen cinema above the existing store in The Broadway, indicative of an interesting new development in high street music, movie and gaming retail.

The venue is set to provide "an eclectic mix of entertainment across film and music" making use of the latest digital technology to enable "a flexible and diverse programming schedule with the ability to respond to local demand."

In addition to a store and cinema, the hmvcurzon also features a café area and fully-licensed bar. An HMV rep informed TechRadar this week that the cinema could be used for interactive gaming events, in addition to movie screenings and other community events.

HMV recently obtained a 50 per cent stake in online retailer 7digital.com and the company plans to develop its 'next generation' store concept over the coming years, bringing together 'physical' and 'digital' content "in an engaging retail environment". Disney also recently announced its own plans to turn its retail stores into 'imagination parks'.

The program at hmvcurzon opens up this coming Friday with The Imaginarium of Dr Parnassus, The Fantastic Mr Fox and the latest Disney Pixar movie Up in 3D.

Future presentations are likely to include such acclaimed new films as An Education, written by Nick Hornby; Taking Woodstock – an Ang Lee film; Palme d'Or winner, The White Ribbon; and Nowhere Boy – the story of John Lennon's upbringing, directed by celebrated photographer Sam Taylor-Wood in her directorial debut.,

Tickets can be obtained online at www.hmvcurzon.com.