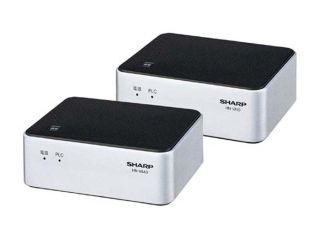 We've already seen a few products that use the HomePlug/PowerLine standard for pumping broadband internet around a building's electrical cabling, but the latest adapters from Sharp in Japan are among the most attractive.

HomePlug relies on existing wiring to pipe an incoming internet connection from its source through an adapter to one or more destination hubs attached to normal power outlets. In other words, it's simpler than setting up a wireless network and tidier than spooling cables through the house.

Sharp's AV1.1 kit is available in various configurations, but the main draw comprises a pair of appropriate boxes for each end for ¥24,000 (£97). The key selling points are that they won't mess up a living room by looking too much like nerdy computer hardware and the small matter of transfer speeds between 85Mbit/s and 200Mbit/s.

Given a range of 150m before the signal tails off and the ability to network up to 16 of the four-port destination hubs, the makings of a high-speed wired house of the future are clear. Just make sure you have enough power sockets to go round.