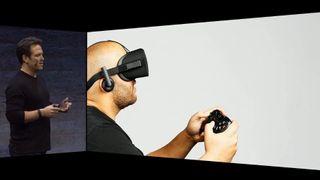 Oculus Rift will ship with a controller made by Microsoft. Yep, you read that right: Oculus has teamed up with the maker of Windows 10 to ship every Rift VR headset with a wireless Xbox One controller.

It's a move that will enable Oculus to play native Windows 10 games, including those streamed from a console in another room.

The unlikely pairing was announced by Xbox head boss Phil Spencer at a pre-E3 Oculus Rift event that detailed how the system will look, what games will be immediately available and how it will work with Windows 10 to deliver high-caliber experiences to our living rooms when the system launches in Q1 2016.

Playing games is only one tool in the Rift's bag of tricks.

It will be able to tap into any video or movie on your Windows PC or Xbox One and stream them to the headset as part of Oculus' "virtual cinema" feature. The only limitation, of course, is that the Xbox will need either a wired or wireless connection to the PC.