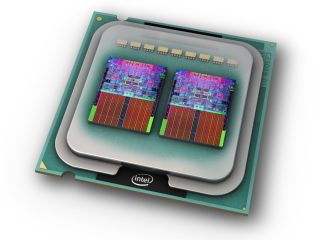 The four cores are originally clocked at 2.66GHz, though Dell ships the XPS 710 H2C with the cores clocked at 3.2GHz. Intel's Extreme processors have the processor multiplier unlocked for easy overclocking.

An Intel representative used the Windows-based Nvidia Control Panel to wind the clocks up to an incredible 3.6GHz on all four cores.

Intel's Steve Hunter took to the stage to talk about the technology. "Intel has innovation as its DNA... to drive new products to customers". He continued on to say that quad core was "good for today, outstanding for tomorrow" and showed benchmarks to back this statement up.

In some instances, the performance of legacy games on the Core 2 Extreme isn't as good as that of the X6800 Core 2 Duo. That's because older games rely more on clockspeed - the dual-core silicon is clocked at 2.93GHz per core while the quad-core is clocked at 2.66GHz per core.

Future games will take advantage of the extra cores. The company demonstrated the difference the extra cores make to a 3D gaming experience where lots of the action happens off screen.

During Intel and Futuremark's Ice Storm Fighters Game Technology Demo , a Core 2 Duo machine slowed to a halt, while the Core 2 Extreme ably carried on as more 'players' were added to the scenario. All cores in the demo were clocked at 2.66GHz.

This is, in part, thanks, to Dell's H2C cooling tech we've talked about elsewhere. Dell's gaming guru Abizar Vakharia said that H2C had been "in development for a year and a half" and quad-core technology represented "the perfect time to bring it to the market."

When questioned whether H2C could make it into smaller form factors, Vakharia responded: "We're investigating the right approach for H2C going forward. Throughout this year and next year you'll see some results."