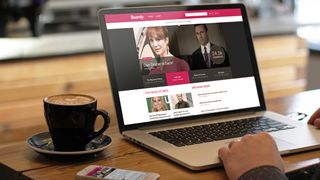 It's been some two years since Zeebox arrived with the idea of bringing web functionality to your regular TV viewing.

During this time it caught the eye of BSkyB, which put money into the service, and its makers have also discovered that when it comes to those using Zeebox, the social side is the clear winner.

So much so that Zeebox is no more: the app now goes by the name of Beamly.

The new app has been redesigned from the ground up, with the social experience that was in Zeebox but hiding on the sidelines now front and centre.

Speaking to TechRadar, CTO of Beamly and former iPlayer boss Anthony Rose explained that the new app represents a shift in the Zeebox's audience now it is flying the social flag.

"The reason is principally over the last six months we have introduced a lot more social features. Some people want the TV guide or the remote functionality, all the gadgety features, and we have really excelled at that. But we have been amplifying social and we have really seen it take off," said Rose.

"Now 65% of Zeebox users are female, particularly in the US. We are resonating with the same sort of audience that Pinterest has, where it is women at home, extremely social, who want to talk about shows twenty-four-seven."

Rose and his team are hoping that Beamly becomes your go-to destination for all things television, with new features elevating it from being just a programming guide.

These include better discovery or shows and people, news feeds for when you are not watching a show and the ability to tap into a community that won't spoil episodes for you.

That's good news for anyone who's ever stumbled across a Game of Thrones spoiler on Twitter.

The new app is available from today and Rose believes it is a service that is well equipped for the inevitable future of television.

"We always wanted to be the social network for TV but when we got started we were faced with broadcast television," said Rose. "So we are calling this second screen 2.0."

"There is no doubt in anyone's mind that we will be watching television in a vastly different way in five to 10 years. Viewings will be where and when we want on any device and we will be interacting with shows and speaking to our friends.

"We have to resonate with that - and offer what people want."