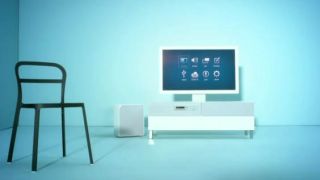 And not a cable in sight

Lovers of low-cost Swedish furniture and low-cost no-name tech, rejoice. Ikea is about to unleash a range of flatpack homewares with integrated TVs and sound systems.

The company is set to bring out a line of furniture with smart TVs, wireless sound systems and CD, DVD and Blu-ray players built into them, designed specifically for Ikea.

The range will be called Uppleva and Ikea is working with Chinese company TCL Multimedia on the technological side of things.

The Uppleva television will be a full HD, LED smart TV with DivX HD compatibility and 400Hz MI. It comes as part of its own bench with an integrated Blu-ray, DVD, CD player and 2.1 sound system complete with wireless subwoofer.

Five European cities will see the first line arriving in June (Stockholm, Milan, Paris, Gdansk and Belin), with seven more European countries following in autumn (Sweden, Italy, France, Poland, Denmark, Norway, Spain and Portugal) and the rest of the world getting the techniture in summer 2013.

"We are launching a new concept where you in one place can buy your furniture and your electronics - designed for and matched with each other from start," said Ikea's living room chief Magnus Bondesson.

But enough of this superfluous spiel, what about the price? Well, the least complex system, with bench unit, television and sound system will start at around 6,500 Swedish kronor (about £600 or $960).

How much self-assembly will be required remains to be seen. Better limber up the allen key just in case.