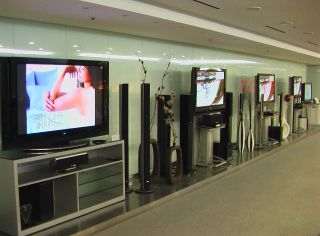 Electronics retailer Dixons is pulling the plug on analogue televisions as the switchover to Freeview digital TV broadcasts looms for UK telly-watchers.

Dixons sold around two million TVs last year, but will only stock sets with built-in digital TV receivers/DVB-T tuners from now on. Dixons made a similar headline-grabbing move last year when it stopped selling VCRs in its stores.

No new stocks of analogue TV sets will be ordered, a Dixons spokesperson said. This is despite the fact that one in three TV sets sold in its stores bats for Team Analogue. Remaining stock in Dixons warehouses will be sold off within six months.

"Digital provides a better deal for customers and reduces waste by removing the requirement for soon-to-be obsolete analogue tuners in our television range and the unnecessary purchase of extra digital set-top boxes," said Peter Keenan, managing director at Currys.

Other retailers, including department stores, are expected to follow Dixons' lead and ditch traditional TV sets. Analogue television broadcasts will be switched off in 2012.