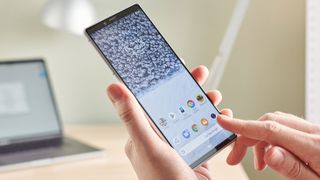 The Sony Xperia 1, which launched at MWC 2019 (Image credit: Future)

We were expecting the Sony Xperia 2 to be one of the biggest phones to launch at annual tech event MWC 2020, but with news that Sony is pulling out of the event due to coronavirus fears, some worried the phone wouldn't see the light of day either. However, Sony has confirmed the launch is still going ahead – in a way.

Sony confirmed in a statement that it won't host a physical event at MWC 2020, but added that it's going to organize an online launch at the same time, so people around the world can tune into a live stream on the Sony Xperia YouTube channel to see its new phones shown off for the first time.

It's worth pointing out that Sony announced it will "withdraw from exhibiting and participating" in MWC, so as well as no press conference there will seemingly be no phones on display – our hands-on review of the Sony Xperia 2 may have to wait, then.

A few different companies have all dropped out of MWC 2020, including LG, NVIDIA, Amazon and Ericsson, but Sony is the biggest name in phones that has dropped out (at the time of writing).

These companies have pulled out due to worries about coronavirus – many phone companies are based in China, where the illness originated, and so it's likely there will be a large delegation from the country. As such, many companies have scaled back or canceled their exhibitions to reduce the risk of many people being in the same area.

At the time of writing there are still two weeks to go until the event, and it remains to be seen if more companies will drop out. If many more companies go, MWC 2020 might not be the huge event it normally is.