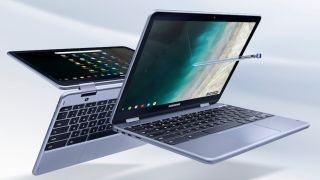 Samsung has teamed up with Intel and Google to produce an LTE-equipped variant of its Chromebook Plus V2 laptop, the firm announced. The Chromebook will call for a steep – as far as Chromebooks are concerned – $599 (about £435, AU$853) starting November 2 in the US.

This LTE-enabled version appears as if it will work on CDMA networks, with Verizon being the premier partner as the device will be sold in Verizon stores as well as through Best Buy and Samsung’s own online store in the US. Samsung has yet to discuss international availability.

Beyond the inclusion of LTE connectivity, which will require the purchase of an LTE data plan from a carrier to use, there doesn’t seem – as Samsung hasn’t released an official spec sheets – to be anything else changed or improved about this 2-in-1 laptop since its introduction back in June 2018 sans LTE.

That means you can expect the laptop to pack an Intel Celeron processor, the dual-camera solution (1 megapixel up front; 13MP around back), Full HD (1,920 x 1,080) touchscreen, 4GB of memory and 32GB of storage. The built-in stylus can be counted on as well.

Samsung’s goal is to make its leading Chromebook an all-in-one device for users, which is admirable. However, you’ll have to weigh whether that’s worth the sizable price hike – not to mention the ongoing cost of an LTE data plan.