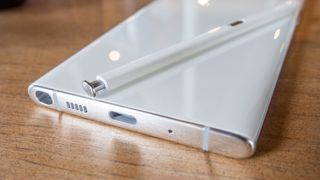 The Samsung Galaxy Note has always had its fans. When the original handset launched back in 2011, its larger screen was unique in the market and it effectively invented the phablet segment.

Since then, the range has commanded a loyal user base that expressed its frustration when the Note 5 didn’t arrive on UK shores and its dismay when the Note 7 had to be recalled in 2016. For this group of die-hards, there is no substitute good.

Samsung doesn’t take this loyalty for granted but sees the Note 10 as an opportunity to broaden the appeal of the range – and to cement its first mover advantage in the nascent UK market for 5G smartphones.

Like many other vendors suffering from slowing growth, Samsung sees 5G as a remedy for market saturation. The 5G edition of the Galaxy Note 10 follows the launch of the Samsung Galaxy S10 5G earlier this year.

By launching the Samsung Galaxy S10 as early as possible, the company hoped to establish the device as the effective flagship for early adopters. This ambition was given a huge boost by the fact, just days before the first 5G network went live in the UK, a ban on US firms doing with business with Huawei came into effect.

Although the impact of that decision is still to be determined, suggestions that future Huawei devices would not get access to Android updates were enough to cause EE and Vodafone to pull the Chinese vendor’s devices from their launch line ups.

This stroke of fortune, combined with the fact that a 5G iPhone is not expected until at least 2020, means Samsung wants to do everything it can to press home its advantages.

“Obviously, our competitors have had some challenges and that gives us a golden window [with 5G],” Conor Pierce, CVP Samsung UK & Ireland tells TechRadar Pro. “The Samsung S10 5G [has been] leading the charge and taking a significant proportion of the market – it’s a very successful device.

“We have to be careful not to overpromise with 5G … but as networks mature, coverage expands and there is greater choice in terms of services, I think [the market] will grow. That gives us first mover advantage.

“But it’s not just about selling more phones – it’s about making sure Samsung is synonymous with 5G and synonymous with trust and security. That will be even more important with 5G.”

5G is integral to broadening the appeal of the range, as is the launch of a smaller 6.3-inch version of the device.

When the first Note launched back in 2011, the inclusion of a large screen and a stylus meant it was positioned as a productivity device. But Samsung believes that many consumers want the technology inside the Note without the larger form factor.

“What we’re trying to do now is broaden the appeal.

“The market is more competitive than ever before. Originally, the Note was the device with the largest screen size available and now there are other options out there. It goes back to the performance and the uniqueness of the device.”

There has also been a conscious effort to position the Note 10 as a media device – and 5G plays a big role in that.

“If you look at markets where 5G is more advanced, for example South Korea, the operators are driving a very strong media and content 5G proposition,” Pierce explains.

But productivity is and will always be one of the key drivers of sales of the Note 10. Samsung has expanded its Microsoft partnership, while Pierce says it knows there are SOHO and SMB users who are out and about doing business but not necessarily tied to a laptop. For them, the Note is an essential device.

“We didn’t launch the Note 5 in the UK and the uproar [was significant],” says Pierce. “The Note 7 was an unfortunate event and Samsung can be proud that it dealt with it promptly and professionally. Having said that, the fact that the Note continues to grow … shows the robustness of the user base.”

But with Samsung having two flagship ranges in the form of the Galaxy S range and the Galaxy Note, and a third in the near future with the Galaxy Fold, is Pierce not concerned that consumers will be confused or fear there are too many competing trade-offs between devices?

“It’s an opportunity but it’s a lot of hard work as we have to be careful not to clutter the minds of people,” he says. “We like offering choice – whether it’s the [mid-range] A series or the [high end] the S series.

“The UK is a unique market in that three quarters is premium (€600+) and that brings its own challenges as we face macroeconomic uncertainties – like [Brexit]. I think giving choice and a consistent message about 5G, but the S series has a place in portfolio, so does the Galaxy Note, and so does the Galaxy Fold.”

“They all complement each other.”