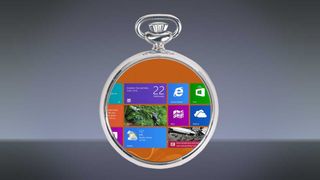 This is not the Microsoft smart band

With Google having played its hand (or wrist, perhaps?) in the wearables arena this week, attention now turns to Apple and Microsoft who are reportedly planning wristbands and smartwatches of their own.

The latest tidbit of information comes on the purported Microsoft smartwatch, (now known as the Microsoft Band) with a new report claiming it'll launch in October and arrive with a mighty 11 of those all-important sensors in tow.

The update from Tom's Hardware sources also brings word on the potential design. Microsoft has apparently eschewed the trend for chunky smartwatch designs like the Samsung Gear range.

Instead, the report claims, it'll boast a much slimmer form factor more like the Nike Fuelband.

The report also corroborates previous leaks suggesting the display will be on the inside of the wrist, which is said to be more a natural position for frequent checking.

The report also goes along with earlier information claiming the device will have a slick user interface and will be cross platform compatible, meaning it'll play nice with Android, iOS and Windows Phone handsets.