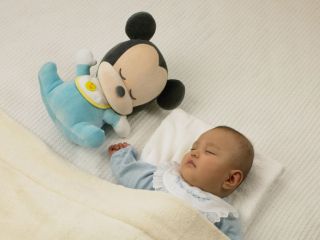 Gadgets designed specifically for babies are never going to be exactly cool but TakaraTomy 's latest early-days gizmo proves that they can be as cutting edge as anything for the grown ups.

The ¥5,229 (£23) Issho Ni Nenne (Bedtime Together) is a soft toy that features a digital audio player for lulling cantankerous babies to sleep. It does this by playing a combination of music and recorded body sounds to create the illusion of returning to the womb.

The womb sounds were recorded using a tiny internal microphone while music was playing outside. The result is a unique combination of sloshing fluids, heartbeats and music filtering in through the mother's belly, which is claimed to soothe a baby to sleep.

TakaraTomy's other products in the series include Akachan Kerotto Switch (Baby Mood Switch), a toy that emits an audio 'curiosity trigger' that was scientifically developed to instantly distract a crying child to make it forget whatever the problem was.

The switch was apparently designed by a laboratory that helps the FBI with audio detective work in criminal cases, so we're willing to bet that there's some pretty sound science behind the seeming magic.