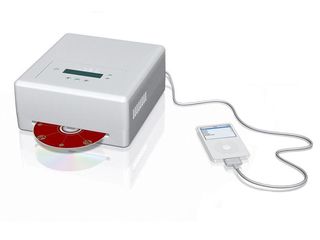 To transfer music without iTunes or a computer, just slot a CD or DVD into the iLoad box and connect your iPod

There's a clever new solution for you if you're out and about but still want to put new tunes on your Apple iPod. iLoad is its name, and it removes the need for Apple iTunes as well as a computer.

Apple has created an empire surrounding its iTunes software during recent years. If you have an Apple iPod , Apple TV or an iPhone (in 10 days' time), iTunes currently sits as the hub in the middle of the Apple-empire wheel.

But with iLoad you won't need a computer, internet connection or iTunes to transfer music, film and videos to your iPod.

Announced today by Wingspan, iLoad is a small box to which you connect your iPod. At the other end you load a CD or DVD, and the music or film is converted to the correct format using a button at the front.

The digital version is then organised onto your iPod. Album and track information will be automatically included.

An average-length CD apparently takes eight minutes to transfer, while a DVD takes 2.5 times the actual playing time of the film.