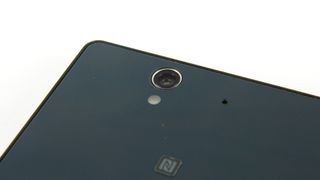 Is this the cameraphone for you?

Obviously not content with the Sony Xperia Z and the mammoth Xperia Z Ultra, more details have emerged claiming the Japanese firm is indeed working on another flagship smartphone in the form of the Sony Xperia i1.

A snap of the Xperia i1 has apparently made its way onto Brazilian site TechTudo, showing the handset sitting in between the giant Z Ultra and Xperia Z, sporting a shiny white body.

However its white gloss finish isn't the big talking point here, oh no. It's actually the camera lens plastered onto the back of the Xperia i1 which has really grabbed people's attention with the leak claiming it's a 20MP offering.

It could be Sony's cameraphone answer to the recently launched Samsung Galaxy S4 Zoom and the much rumoured, 41MP-toting Nokia Lumia 1020.

The site claims it managed to get a brief hands on time with the Xperia i1, which has been referred to as the Xperia Honami in earlier reports.

It's said that the Xperia i1 was running Android 4.2 Jelly Bean, with virtually no border around the screen and a slim body which mirrors its brothers.

Although the site reckons it has spent time with the Xperia i1 it wasn't able to furnish us with any more specs, so we're still going on the 5-inch 1080p display, 2.3GHz quad-core Qualcomm processor, Walkman audio chip and Carl Zeiss lens we've seen attached to the Honami name.

The 5-inch display looks unlikely though as the leaked image clearly shows the Xperia i1 - if that really is the device - is larger than the 5-inch Xperia Z, so we may be looking at a screen which is more in the region of 5.4 inches.

There's no word on a potential Sony Xperia i1 release date, so we're going to have to wait and see whether this mighty snapper is fact or fiction.