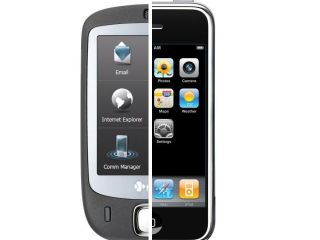 If the HTC Touch is no more an iPhone killer, then Tim Henman is a Federer killer, says Stephen Fry

Actor and smartphone addict Stephen Fry has launched a hilarious, but barbed attack on Windows Mobile.

"We know what an insult to the human spirit were some of the monstrosities constructed in past decades. An office with strip lighting, drab carpets, vile partitions and dull furniture and fittings is unacceptable these days, as much perhaps because of the poor productivity it engenders as the assault on dignity it represents.

"Well, computers and SmartPhones are no less environments: to say 'well my WinMob device does all that your iPhone can do' is like saying my Barratt home has got the same number of bedrooms as your Georgian watermill, it's got a kitchen too, and a bathroom."

Fry, whose new blog kicks off with a 6,500-word essay on smartphones, also puts the boot into the Sony Ericsson's P1i and the aborted Palm Foleo.

iPhone: good, but not great

He rounds off by taking a mild-mannered swipe at the iPhone. He says Apple needs to open up the phone's operating system to third party applications, to stop faffing around with ringtones and to add a physical keyboard.

The self-confessed Mac and gadget addict says his motto is "There's never been a smartphone invented that I haven't owned."