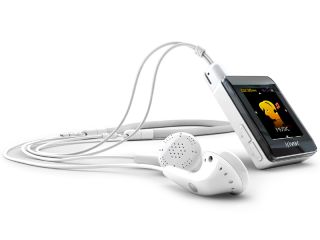 MP3s are a perfectly adequate source of music and in many cases perform better than multi-thousand pound CD players. That's according to AVI Hi-fi boss Ashley James, who made the statements in an exclusive interview with Tech.co.uk.

James was displaying his new ADM9 active loudspeakers at the Bristol Hi-Fi Show, and had them hooked up not to a high-end CD player but rather a Mac Mini playing MP3s.

"I can also tell you that I have loads of discerning customers who've gotten rid of very expensive hi-fi systems and have bought some sort of player which compresses the music for them and decided that at certain levels of compression that they and none of their friends can actually tell the difference," he said.

James said that experts involved in compression, hi-fi enthusiasts and people in the industry, agree that AAC, as sold by iTunes , is indistinguishable from the music coming out of a CD player.

The hi-fi boss's comments appear to back up what most music listeners have been telling the record industry and retailers for a good few years. An increasing number of people are downloading heavily compressed music instead of buying CDs, and they either don't mind the dip in quality or they don't notice it.

According to the AVI man, compressed music only sounds particularly terrible when played through inferior amplifiers and speakers.

"There are artefacts in heavily compressed music which may be audible, and they're certainly audible on crap hi-fi systems," he said.

"It's a very complicated subject, compression, and so somebody is going to read this and say 'that bloke is up his arse, he's talking a load of nonsense' but I'm going to try and put this in a language in which you can give to your readers.

"Essentially if you've watched a very large television you've probably noticed that footballers blur when they're moving but when they stop they're clear again; that blurred part is like a transient in music terms - that's a JPG and we're talking about an MPEG aren't we? So the same thing has happened, we're throwing away large amounts of information and the 'blurring' is one of the artefacts you see."

"So if for instance, the result of (the compression) is that musical transients are smeared, now those musical transients become too loud for most musical amplifiers sold at this hi-fi show, most of them are 30 or 40 watt amplifiers when the transient might need 500 watts. Which means they're only going to sound right on a good system.

"So, if in addition to the amplifier clipping because it can't produce the transient, the transient has been smeared by the source and so it doesn't take a great deal of imagination to see that an MP3 on an average bit of hi-fi might sound a bloody sight worse than a record and certainly worse than a CD."

But James said that as long as you're playing MP3s, like those sold over the internet, through a good enough hi-fi system, you won't be able to tell the difference between certain compressed music and CDs (which use a much milder form of compression). And even if you don't own a top of the range hi-fi system, he says most people don't notice the difference.

James went on to say that if music buyers had been really concerned with higher quality music, they would have embraced the SACD and DVD-Audio formats.

"For years and years the hi-fi industry has wittered on about 16 bits not being enough and blamed the fact that they haven't used more. But when they got to SACD, no one bloody well wanted it so that was a load of tosh, too," he said.