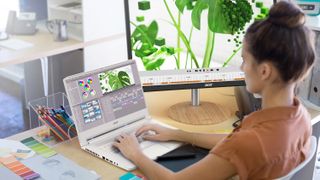 Computex 2019 has shown that mobile workstations are going to get a lot more powerful when it comes to graphical workloads. That's because the latest professional graphics processors (GPUs) from Nvidia are finally coming to notebooks.

These new mobile workstations – some of which are consumer laptops freshly outfitted with this work-ready gear– will include Nvidia's Quadro RTX GPUs built on the Turing architecture.

Many of the laptops that will come out with this high-end hardware will have all the horsepower of even the best gaming laptops, and then some. Many will boast the latest Intel Core i9 processors (CPUs), for incredibly strong processing power to go alongside the solid graphical power.

While several of Nvidia's Quadro GPUs will appear in the new mobile workstations, the powerful Quadro RTX 5000 seems to be chief among them. This GPU will power many of the new laptops under Nvidia's RTX Studio moniker.

The new mobile Quadro RTX graphics cards will come to workstations from many of the big names in laptops.

Acer is launching the ConceptD 7 notebook that will be powered by a Quadro RTX 5000 GPU. This is part of Acer's new Concept D 'prosumer' family of products, with refined designs, serious specs and steep prices.

There will also be Razer Blade Studio Edition laptops, which will include an upgraded Razer Blade 15 and Razer Blade Pro 17. The new laptops will each feature a Mercury White anodized aluminum finish, 32GB of RAM, 1TB of NVMe storage and Quadro RTX 5000 GPUs paired with Nvidia's new Studio drivers – firmware designed to support graphics-intensive workloads.

MSI also has a line of Quadro RTX-packed laptops coming. These include models will live in the existing WS and WE series as well as a new WP series. They'll be badged by Nvidia's RTX Studio label. MSI will start the series with the WS65, WS75, WE75 and WP65 laptops.

In addition to these, HP's Z workstation will add the Quadro RTX GPU, and models will also come from Dell, Asus and Lenovo.