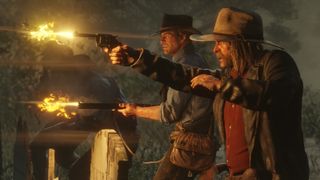 In an interview with The Hollywood Reporter,  when asked if he would be interested in having a game such as Red Dead Redemption 2 on the Switch, Reggie explained that though Nintendo would "love" to have the title on its platform, it wasn't that simple.

"Absolutely. We’d love for it to be there," Reggie told The Hollywood Reporter. "But again -  and this is where there needs to be an understanding of just the development process -  Red Dead has been in development for years, time that predated any communication of Nintendo Switch. So, from the developer’s mentality, they need to move forward and finish the game they’ve been working on and then be in a position to look at other opportunities."

Reggie went on to explain that most big third-party titles began development before the Nintendo Switch, which is why they potentially haven't made it to the platform. "What happens moving forward? We’ll see," he teased.