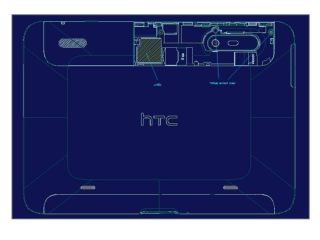 This big blue drawing is of the HTC Puccini

The HTC tablet codenamed the HTC Puccini has breezed through the US Federal Communications Commission (FCC) testing, suggesting a launch date could be imminent.

All electronic gadgets that use a radio signal have to go through FCC testing in the USA, so it's a fairly reliable way of confirming that a rumoured gadget exists.

The technical drawing of the HTC PG09410, to give it its model number, shows a SIM card slot, a camera and flash, and LTE radios, suggesting those lucky blighters in the US will enjoy 4G connections.

This isn't the first time we've heard tell of the 10-inch HTC Puccini – we first saw some screengrabs surface back in May, when rumoured specs included a 1.5Ghz Qualcomm MSM8660 dual-core processor and an 800x1280 display.

Regular rumour-starter Digitimes then went on to report that the tablet would see a UK release date of June 2011 – but with that date long since passed, a September launch could be on the cards.

However, it's worth noting that HTC has asked for all photos and the user manual to be kept confidential until 30 December.

We'd say the imminent arrival HTC Puccini is a pretty safe bet; but will it launch in the UK? That's what remains to be seen.