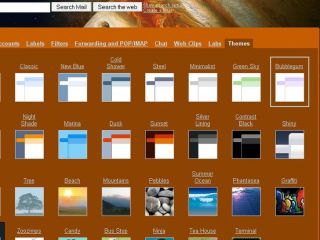 As we reported earlier Google has brought themes to its web-based email allowing you to personalise your page.

A short while ago the update reached our Gmail account, and we were greeted with 26 new themes to choose from, ranging from subtle colour differences, to more whacky themes such as 'Ninja' - which, according to a Google spokesman, "is not currently available within China and Korea due to cultural sensitivities".

But these themes are more than simple overlays, with some of them taking information based on your current location, and amending their appearance accordingly.

For example, the theme 'Tree' will change its appearance depending on the weather where you are, and the 'Summer Ocean' theme reflects the time of day (so you can see the sunrise and sunset).

"We wanted to go beyond simple colour customisation, so out of the themes we're launching today, there's a shiny theme with chrome styling, another one that turns your inbox into a retro notepad, nature themes that change scenery over time, weather driven themes that can rain on your mailbox, and fun characters to keep you in good company," explains Gmail engineer, Annie Chen.

In effect, these are 'live' themes, and despite the selection currently being limited to those created by Google this hasn't stopped developers getting excited about the possibilities of making their own themes. And, when we spoke to Google, the company was open to the idea of third-party developers eventually being able to create their own themes.

"It's not a definite no, by any means," explained Anthony House, part of the communications team at Google. "This is the first day that these new themes have been around, and we're going to see how people use them. If developers push the boundaries, and want it more open, we'll react to that."

You heard it here first.