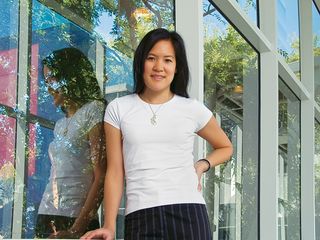 When Google's renowned visual design lead, Douglas Bowman, left the search giant at the end of March, he wrote a passionate blog post about his reasons for quitting.

He claimed that the company's reliance on data was so extreme, it prevented it from making any daring design decisions, and quoted one instance when a team couldn't decide between two blues, so were testing 41 shades between each of the choices to see which one performed better. Bowman's post sparked a heated debate on the web.

Irene Au, Director of User Experience at Google, acknowledges that Bowman is an extraordinary designer who made huge contributions to the company's products. However, she insists there's a clear logic behind Google's approach. "It's very much a culture of experimentation," she explains.

"We often will put things out on an experimental framework and look at how they perform, and use that to drive our design decisions. Search is the interface that most of our users are familiar with and so what goes into the search interface is really what drives our visual language.

"Search is such a fragile interface. It's humbling to see how the slightest changes in design, just pixel-level changes or barely perceptible changes to colours, can have such a dramatic impact on usage and revenue. At Google, we're in a unique position to measure the impact of design on the business, and we take advantage of that opportunity to make design decisions based on evidence."

Au, who spent eight years at Yahoo, accepts that some people might feel threatened by the data-driven culture and perceive it to be crippling, but highlights the fact that others might see it as empowering. It's a challenge to design something that's as beautiful as it is lightning fast.

"One of the best things about designing for the web is that you can instantly see and measure the impact of your changes," she says. "Google understands that designing engaging, useful and usable products with complex workflows requires something more than data.

"That's why we have a significant team of designers who bring unique skills to the teams they work with. Data informs decision-making but it's less useful for conceiving and building conceptually new directions. It's most useful for optimising and refining an established concept."

Historically, engineers vastly outnumber designers at Google (Au herself has degrees in electrical and computer engineering), which makes scaling the design organisation a big challenge.

"As a design team, we can't afford to have very high touch involvement with every single project, where we create pixel-perfect designs and have web developers that are implementing the front end exactly to the specifications," she says.

"Any kind of design system that we create has to be incredibly practical to implement. Our design strategy is all about creating an experience that's fast, not only in terms of latency, but also in terms of human cognition and perception.

"One of the ways in which we achieve this fast feel is to have a very minimalist look. Also, Google focuses on aggregating the data and presenting it to the users, so we don't want it to feel editorialised. We want it to feel machine driven, so people understand that it's not like we're presenting results with a certain point of view."