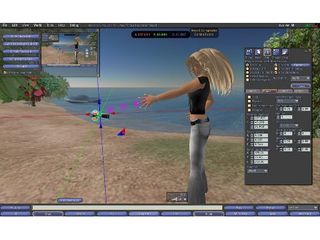 Second Life - be careful who you (virtually) cuddle...

A British woman is filing for divorce after discovering her husband has been virtually philandering in Second Life.

28-year-old Amy Taylor cited unreasonable behaviour in the petition for divorce, claiming that she had walked in on her husband having sex with another woman.

On the computer. In a game.

In an ironic twist to the tale, Taylor met (estranged) hubby David Pollard, in a chatroom back in 2003, when an online romance blossomed into marriage, leading her to up sticks from London to move down to the wilds of Cornwall.

"I went mad - I was so hurt. I just couldn't believe what he'd done," Amy said, of finding her feckless hubby having pretend sex in a game with a stranger.

"I looked at the computer screen and could see his character having sex with a female character. It's cheating as far as I'm concerned."

"The solicitor wasn't at all surprised - she said it was her second divorce case involving Second Life that week," she added.