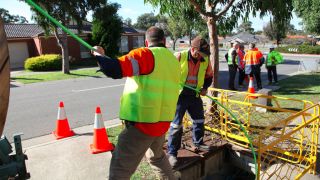 This is a terrible angle to catch a glimpse of copper...

Last week, Telstra CEO David Thodey said that Australia's century old copper network could "keep going for another 100" years, despite Telstra executives saying back in 2003 that the legacy network would need replacing.

This has caused union leaders to speak out about the state of the copper network.

Questioning the change in Telstra's stance, Communications Workers Union communications division president Len Cooper has called on Telstra for full disclosure on the state of its copper network, according to ZDNet.

On the back of reports that the copper network is deteriorating, New South Wales' Communications, Electrical Plumbing Union assistant secretary Shane Murphy, on the other hand, has told ABC News that Telstra's copper network should be completely replaced.

"It's time to replace the whole network, not a part of it," Murphy said.

According to ABC News, Shane Murphy's criticism of the copper network stems from the use of plastic bags by Telstra contractors to waterproof parts of the network.

He said that there is no "band-aid solution", saying that such quick fixes has helped worsen the state of the network nationally.

However, Telstra said in a statement to ABC News that the use of plastic bags is only a temporary fix in only a small number of cases, and that under company policy, they are replaced with permanent fixes as soon as possible.

Telstra has also been criticised in the last couple of months over the handling of asbestos found in its pits and ducts by contractors. This issue has halted works on the National Broadband Network (NBN) in the affected areas, and the general state of the network could have further implications for the NBN rollout and policies in the future.

With contradictory reports popping up about the actual state of the copper network, it remains a contentious issue.