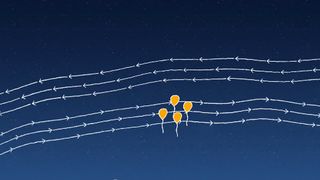 Project Loon? Sounds like a lot of hot air... (sorry)

Google believes a fleet of free-flying balloons 12 miles above the earth's surface could be the key to bringing mobile phone service and internet access to some of the world's most remote areas.

Project Loon, as it has been dubbed, is the latest brainchild of the secretive X Labs team headed up by Sergei Brin, which is also responsible for the birth of Google Glass.

While acknowledging that the idea is somewhat "pie in the sky", Google believes the proposed network of giant balloons, 15-metres in diameter, could bring speeds comparable to 3G to those without access.

The video introducing the project says that Loon could facilitate education and medical assistance to places without schools and doctors, and it could also assist with communications after natural disasters, when the traditional infrastructure is destroyed.

"We believe that it might actually be possible to build a ring of balloons, flying around the globe on the stratospheric winds, that provides internet access to the earth below," wrote project head Mike Cassidy.

"It's very early days, but we've built a system that uses balloons, carried by the wind at altitudes twice as high as commercial planes, to beam internet access to the ground at speeds similar to today's 3G networks or faster. As a result, we hope balloons could become an option for connecting rural, remote and underserved areas, and for helping with communications after natural disasters."

The company is already testing the "highly experimental technology" in New Zealand where it has already sent up 30 balloons.

The balloons will also be tested in Australia by mid-2014, as well as Chile and Argentina. While it seems likely that the location for trials in Australia will be Tasmania, partly due to stratospheric conditions in the region, according to News.com.au, Mike Cassidy has that Google will be in talks with the Australian government before trialing the technology.

However, won't they just float away? Apparently not. Google said it can keep them in place using a new wind and solar powered-based system that allows it to control the altitude of the balloons in order to catch the right winds.

So there you have it: A story about balloon-powered internet access and it's not even April 1. Let us know your thoughts on whether this can become a reality in the comments section below.