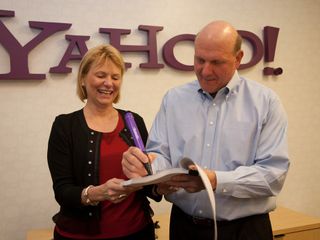 Yahoo behind Ballmer and Bing

The CEO of Microsoft, Steve Ballmer, has been quizzed on the search market, Bing and the dominance of Google.

Ballmer is convinced that Bing can be the number one search engine but it may take some time.

Speaking at the Search Marketing Expo in California, when he was asked if Bing could usurp Google, he told audiences: "There's no good answer to this question. If you say yes, you sound arrogant. If you say no, you sound like you're happy with second place.

"No one aims to be second, so the answer is yes."

When asked what timeline he though this may happen in, Ballmer noted there is no deadline, mentioning it could be in the next 10, 20 years or more.

"Tomorrow's goal is to gain a few points, a 10th, and just keep working and working," he explained.

When asked why Google is the more dominant, he unsurprisingly pointed out that "the No. 1 thing that Google benefits from in search is they did it right first.

"We started later. There's a value to incumbency."

Bing is slowly adding to its search market share. Its recent tie-up with Yahoo means that it will have a 30 per cent market share (in the US) to Google's 65 per cent.

We are betting that Microsoft is happy that there's no time limit on overtaking Google as it could be a waiting a long time to achieve such a thing.