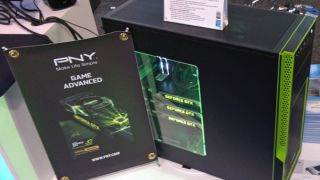 Supermicro wants to continue trying to crash the gaming PC market through a new machine built on Intel's Haswell architecture that builds on its stellar reputation in the gaming server market.

The new PC has a mouthful of a name (SYS-5038AD-I) and comes with an Intel Core i7 5960X Extreme Edition processor, is cooled by an Asetek higher performance liquid cooler, has an S5 chassis and will be upgradeable to an Intel Broadwell-E chip.

Digging further inside the machine it has a Supermicro C7X99-OCE motherboard that supports overclocking, 16GB of DDR4-2133 RAM, two Nvidia GeForce GTX 960 graphics cards in SLI, and a 1,200W Platinum PSU, according to Maximum PC.

Release details thin on the ground

Supermicro's traditional hunting ground is the server market, where it has made a name for itself with the GRID gaming servers. To that end, it recently released a glut of low-power, high-density solutions that support the Intel Xeon processor D-1500 family that build on a partnership it agreed with Intel in February 2014 to embed the chips into its servers.

It has yet to detail how much storage will be inside the machine. A tentative release date for the PC and pricing are expected to be follow in the coming weeks to months.