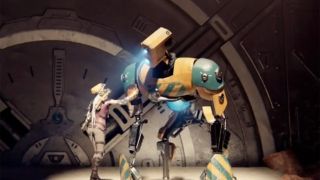 Microsoft has just announced its first new IP of E3 2015. It's called Recore, and it has us very intrigued.

It's being made by Mega Man creator Keiji Inafune and his studio Comcept as well as talent behind Metroid Prime. The short trailer shows a woman walking through a wasteland with her companion robot dog and then, well, you'll see.

You can watch the full trailer below.