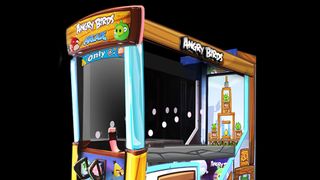 Angry Birds' star has waned somewhat since it took the mobile gaming world by storm six years ago, but Rovio hasn't given up on the franchise yet: and this arcade cabinet version actually looks like it could be fun to play.

It's 8 ft long and is fitted with a 55-inch screen at one end, reports Arcade Heroes. The best part is there's a real slingshot you can use to fire your birds at the pigs on the screen. It's like those basketball arcade games but with animated cartoon characters.

Unfortunately, it looks like only US gamers will be able to have a go at this new Angry Birds incarnation - at least for the time being. It's rolling out at Dave & Busters first before expanding to other arcades. The makers say there are 500 different levels to work through.

As for the rest of the Angry Birds franchise, there's a movie version on the way and a proper sequel in the pipeline too. There have been plenty of follow-ups to the original, as variations on a popular theme -Angry Birds Star Wars anyone? The officially labelled Angry Birds 2 is out at the end of the week.