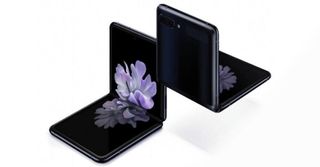 This could be the Galaxy Z Flip (Image credit: WinFuture)

It's heavily rumored that Samsung will introduce its second foldable phone in the next few weeks alongside the Samsung Galaxy S20 series - but it may not come with 5G on board.

We know this because the Samsung Galaxy Z Flip - the current rumored name for one of the foldable phones the company has in development - recently had authentication from the FCC (Federal Communications Commission).

This is a US government agency that regulates gadgets that use radio signals in the US, and the listing so far doesn't include a 5G band for the upcoming device.

While that may mean the phone doesn't support 5G at all, it could be that this is just one variant of the phone that has been run through the FCC.

Samsung's Galaxy Fold came in a 5G version in some markets including the UK and South Korea, but it was never an option for those who live in the US. That may be repeated again here with the Galaxy Z Flip.

But even if no version of the Galaxy Z Flip comes with 5G, some upcoming Samsung phones likely will.

Most notably, consistent leaks have suggested the Galaxy S20 series will all come with versions that support the technology.

We're expecting both the Galaxy Z Flip and the Galaxy S20 range to be announced on February 11, and we've seen some strong rumors that you'll be able to buy at least some of the phones on March 6.