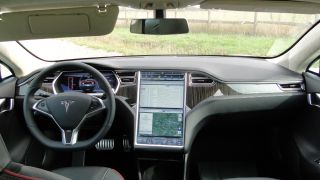 Update: Tesla published a report about a tragic death involving a driver using Autopilot, the first fatality reported while the autonomous driving system was in use. The victim, Joshua Brown, was a Tesla enthusiast who, months before his death, posted a video of his Model S' Autopilot system saving him from a potential crash.

Following the discovery that Autopilot was engaged during Brown's fatal crash, Tesla sent the National Highway Traffic Safety Administration (NHTSA) information about the crash. NHTSA is now opening a preliminary evaluation into the performance of Autopilot at the time of the accident.

Autopilot is disabled by default in Tesla vehicles, and drivers receive a warning that the feature is in public beta before it can be enabled. Tesla emphasizes that drivers should be alert and ready to take control at all times. "Nonetheless, when used in conjunction with driver oversight, the data is unequivocal that Autopilot reduces driver workload and results in a statistically significant improvement in safety when compared to purely manual driving," writes Tesla.

Unrelated to the incident is a report that Tesla is working on a major update for its cars that will improve its self-driving Autopilot system as well as revamping its in-dash interface.

Update 8.0 will bring the ability to take off-ramps autonomously, according to Electrek. Tesla drivers will be able to tell their cars to get off the highway simply by signaling. Tesla Autopilot already allows drivers to change lanes by doing so. Once you've taken the off-ramp, you'll need to retake control of the vehicle as Autopilot can't drive on surface streets.

Other upcoming improvements to Autopilot include a more responsive Traffic-Aware Cruise Control and Autosteer feature for smoother driving in traffic. The dashboard interface will also be updated to show the position of surrounding cars from any angle. Currently, the dashboard only displays the rear of surrounding vehicles.

The upcoming update will also bring changes to the maps and navigation interfaces with an improved "turn list" and improved routing to find a charger when the battery is low.

The Tesla 8.0 update is currently being tested, and this may mean some features will be changed or omitted in the final release. There's no word when Tesla owners should expect to receive the update, but Electrek speculates it could arrive in a few weeks or months.