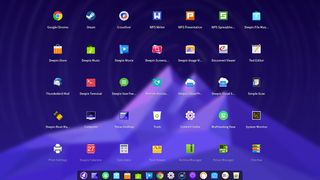 Linux is built for tinkering and experimentation, which means it’s always morphing and changing. New distros are popping up all the time, because all it takes is a little bit of determination, time and effort to create a custom operating system.

Not all of them hit the mark – there are stacks of Linux distros that have seen little to no action, and we’re almost certain that some have been released and never installed by anyone other than their creator.

Other alternative distros though, fare rather better. Look at the success of Linux Mint, which spun off from Ubuntu to become (at times) arguably more popular than its own parent. Indeed, Ubuntu itself grew from Debian, and its niche offshoots (distros like Ubuntu Studio) have seen good levels of interest. If there’s a market out there for your distro, there’s traction to be had.

So let’s look at our pick of the five distros moving up swiftly through the ranks in 2018. Some of these might eventually become the best Linux distros out there, whereas some might fade away – but it won’t cost you a penny to try them out.

Linux Lite is a simple, fast, and free distro aimed at beginners to Linux, not least Windows users. It does this by aiming to be easy to use while also providing applications to cover common software needs.

Linux Lite is based on Ubuntu's long-term support (LTS) release, and uses the Xfce desktop. Bundled applications include Skype, Steam, Kodi and Spotify, as well as LibreOffice. Linux Lite is up and running and ready to use after you first boot up, with no need to install any additional software.

Even though it's a lightweight distro aimed at new users, its simple no-nonsense approach to the user experience has made it increasingly popular even with experienced Linux users.

What also makes it attractive is that it doesn't have high hardware demands. Preferred specifications include a 1.5GHz processor, 1GB RAM, and 20GB storage. This means it can be installed and run perfectly fine on a lot of older desktops and PC's.

Even better, some users have commented that it is not too dissimilar to the hugely popular Windows XP environment, which is another plus for attracting new users to Linux away from Windows machines.

Plenty of support documentation is provided, along with an active user forum for support, trouble-shooting, and general questions.

A good-looking OS boasting a range of custom apps

Deepin (formerly known as Linux Deepin and HiWeed Linux) describes itself as ‘outstanding from inside out’.

It's a Chinese-developed distro focusing on simplicity and elegance. Until 2015 Deepin was based on Ubuntu, but it’s now a Debian-based distro.

The OS uses a desktop environment called DDE (Deepin Desktop Environment) based on the Qt 5 toolkit combined with the Mutter Window Manager – the overall crisp look and feel is very reminiscent of macOS. The desktop supports hot corners and incorporates a number of widgets to display information such as the weather and app notifications.

The latest release of Deepin (15.8) incorporates HiDPI meaning it supports all HD displays. It also comes with a brand new design for the Control Center and desktop. Deepin is only available for 64-bit systems as a 2.1GB ISO. You can boot this in Live mode and the installer is extremely easy-to-use.

MX Linux is described as a ‘midweight’ distribution which means it's both easy on the eye and not too hungry when it comes to chomping system resources.

The current version of MX Linux is 18. It was released in December 2018 and is based on Debian‘s ‘stable‘ branch, Stretch. The OS includes some very respectable default applications such as Mozilla’s Firefox web browser and Thunderbird email client. MX also includes both the VLC and Clementine media players making it capable of playing a large variety of media out of the box. The LibreOffice office suite is also included.

You can install extra programs with a click of your mouse using the MX Package installer which contains a mixture of applications from the Debian Stable/Testing repositories, as well as a few others which have been chosen by the developers.

Although the desktop environment uses the simplistic Xfce, you may find this hard to believe at first due to its elegance. This doesn't take away from its speed as menus and windows open almost instantly.

MX Linux can run from a Live DVD or USB if you want to test it before installing. If you use a USB stick, you can also use Persistence to create a custom OS that you can carry around with you.

MX is available for both 32-bit and 64-bit systems. Your machine will need at least 2GB of RAM to run the OS smoothly.

Locks down your system via sandboxing and anonymizing

Subgraph is a bit different in that it’s a rising star of a Linux distro which is designed specifically for privacy. The developers stress that it's still in development but the OS holds great promise for privacy lovers.

Subgraph's kernel has been hardened using Grsecurity, which is widely regarded as one of the most secure Linux cores in the world today. This hugely reduces the chances of becoming a victim of DMA (Direct Memory Access) attacks, which is one of the most common methods hackers use to attempt to gain control of a computer.

Applications such as the Tor browser or IceDove email client are sandboxed using a system named ‘Oz’, giving you an extra layer of protection if an app should be compromised. You can also use specialised whitelists and blacklists to determine which applications are allowed to run.

All internet traffic is routed through the anonymising Tor network, which makes it extremely difficult to trace your location, but will slow down your connection speed to some extent.

Unlike some other distros of its type, Subgraph is quite easy on the eyes, using the Gnome desktop environment and Xpra to provide a simple but attractive interface.

Despite all its privacy enhancing features which supposedly function out of the box, Subgraph is still alpha software and should not be relied upon to secure any truly important information.

In April 2017, Joanna Rutkowska, the creator of Qubes, together with security researcher Micah Lee, were able to circumvent Subgraph's security by running a malicious app in the Nautilus file manager, which isn't sandboxed. This attack would also work on other privacy-oriented distros such as Tails.

The Subgraph team has yet to develop a patch for this exploit, but has pointed out that the OS is still a work in progress. Subgraph nevertheless remains easy-to-use and works seamlessly, with all the heavy lifting done in the background security-wise.

For those who put a premium on stability

We can hear you shouting from here. “But TechRadar,” you bellow, “Debian is massive! How can you call it ‘rising’?” Here’s how: it is definitely a rising distro. While Ubuntu did a great job bringing Linux to the masses, many users brought on board by its orange-and-brown glitz and glamour have moved away thanks to a few controversial changes. The natural post-Ubuntu route, given the huge amount of shared DNA, is its parent OS, Debian.

Debian packages are selected for their stability. Any 'testing' version of Debian must first go through a 'freezing' process where no new packages are added before it is granted the honour of becoming a fully-fledged 'stable' version. This is the case with Debian 10 Buster, which became the current ‘stable’ distribution of Debian as of July 2019.

Debian only incorporates 'free' software which means that if you use proprietary firmware – for example, for your Wi-Fi card – you may need to use the 'non-free' repositories or manually download drivers yourself. (This could be very tricky if the device with missing drivers is the machine you use to connect to the internet, for obvious reasons). If you don't feel comfortable tinkering with drivers, choose a distro with better support for non-free hardware.