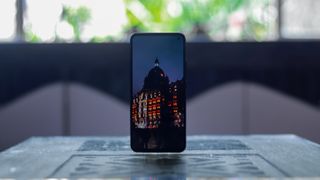 The Vivo V17 is now officially available in India, bringing a 48MP quad-camera setup and a new design to the front and the back.

The Vivo V17 Pro came to India in September, making it the first phone with a dual pop-up camera and a total of six cameras. Less than three months later, we have the Vivo V17, which retains the internals from its elder sibling but brings changes to the display, design, and camera layout.

It drops the cool pop-up camera mechanism but instead comes with what is likely to be the smallest punch-hole on any smartphone currently. Spanning less than 3mm across, the selfie camera on the Vivo V17 is smaller than most phones’ chins.

The other major design change comes with the cameras, as all the four rear sensors are now placed in a rectangular island in the corner, seemingly inspired by Samsung’s new design language for its smartphones. The Vivo V17 has a 48MP f/1.8 primary camera, followed by an 8MP ultra-wide shooter with a 120-degree field-of-view, a 2MP bokeh lens, and a 2MP macro shooter that can focus at objects as close as 4cm.

On the inside, the Vivo V17 is powered by the Snapdragon 675 AIE chipset (which also powered the Vivo V15 Pro) along with 8GB of RAM and 128GB of storage. The battery is rated at 4,500mAh with support for 18W (9V 2A) Dual-Engine fast charging over USB Type-C.

In India, the Vivo V17 is available in only a single configuration which has 128GB of storage and 8GB of RAM, and two color variants — Midnight Ocean and Glacier Ice. It is priced at Rs 22,990 and will be available for sale starting December 17 on Flipkart, Amazon India, Paytm Mall, Tata CliQ, and Vivo's website.