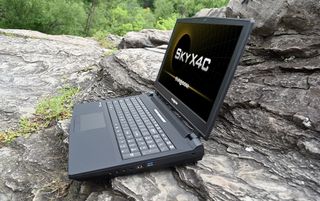 The most powerful laptop in the world right now is not exactly a looker - but if you're in the market for the fastest and the most capable notebook on the planet, looks are probably not a priority.

Meet the Eurocom Sky X4C- it's not as pretty or portable as the 16-inch Apple MacBook Pro, but it's a significantly more powerful option if you don’t mind the extra heft and weight.

Eurocom Sky X4C - $18,623 direct
This workstation really is what dreams are made of. One of the fastest CPUs around, with as much memory as you can get and plenty of storage. With a 4K display, a top of the range GPU and tons of connection capabilities, it's the ultimate portable machine for work or play.View Deal

With the Sky X4C, you're getting a laptop that beats out 99.99 percent of desktops available today.

To nudge the price almost to $20,000, opt for a 3-year return to factory depot warranty plan and choose a beefier 780W external power supply unit. Most Eurocom laptops also allow the CPU and GPU to be upgraded easily.

If you know of a more powerful laptop in a 15.6-inch form factor, by all means get in touch.