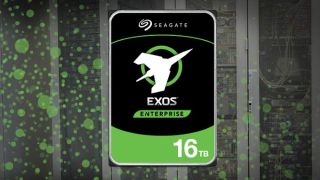 Storage giant Seagate unveiled two new hard disk drives with a 16TB capacity earlier this year and for once, it was not all about data centers.

At just over $25 per TB, this is a fantastic, fantastic deal for those looking for a drive to rule them all and for once, it doesn't carry any significant premium. Just bear in mind that 16TB is a lot of data to lose, just make sure you it backup.View Deal

Both have nine platters, use Helium technology and have a five year warranty (the IronWolf has three); they also share the s same spinning speed (7200RPM), idle power (5W), average latency (4.16ms) and cache (256MB).

The Exos range carries a MTBF (mean time before failures) at 2.5M hours and boasts a higher sustained transfer rate at 261MBps; the IronWolf Pro and the IronWolf reach 250 and 210MBps respectively. Note that the IronWolf Pro also comes with bundled Rescue Services, great for data recovery.

Toshiba announced the 16TB MG08 series in January 2019 but we have yet to see any stock in the channel. Western Digital also shipped its first 16TB hard disk drives as well but based on MAMR rather than HAMR technology - as used by Seagate.

While SSD prices have been falling, they are still far more expensive than their hard disk drive counterparts. At about $2800, Micron’s 9300 Pro is nearly SEVEN times more expensive although this gap has all but disappeared for sub-1TB capacities.