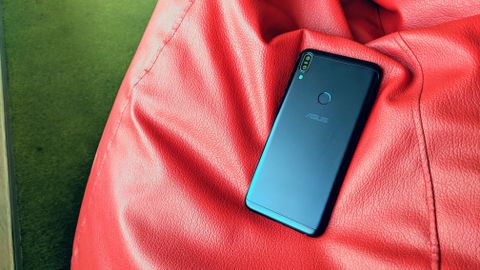 If a smartphone's battery is your top priority, then you're going to be hard pressed to find a cheaper phone with better battery life. The Zenfone Max Pro M1 may not be perfect, but it's certainly a budget offering that can put its money where its mouth is.

Asus created quite a buzz with its partnership with Flipkart last week and now they’ve come out with their latest phone, the Asus Zenfone Max Pro M1. On paper, it checks off all the boxes that a mid-range phone should.

The Zenfone Max Pro M1 doesn’t scream flashy, in fact, it doesn’t scream anything at all. The phone doesn’t have any defining feature that sets it apart from other phones in the same price range, but you know what? No other phone offers the same features for Rs 10 999.

This phone has the potential to be one that offers one of the most value-for-money deals. But there’s a catch and a big one at that.

The first thing you ever experience about a phone is how it feels in your hands. And, at that moment, you matter how many times you’ve told yourself not to judge a book by its cover, you judge nonetheless. Especially, when the phone feels good.

The Zenfone Max Pro M1 is not a phone you can use in one hand. The 6-inch full HD screen ensures that your thumb always ‘can’t quite reach’ the other end of the display. It’s not a phone to be taken lightly either, and I mean that literally.

The smartphone feels solid, and it even feels reassuring in your hands. All the bells and whistles are tucked in, to give a sleek exterior. Even the vertical dual camera on the back looks like it’s trying to be as subtle as possible. Unlike the big gaping speaker holes on Xiaomi phones, the Asus Zenfone Max Pro M1 features horizontal slits along the bottom that look more classy. If the phone had a personality, it would probably teeter towards ‘humble’.

But humble, this phone is not.

Within its aluminum structure lies the Snapdragon 636 Chipset, 3GB RAM, and 32GB storage. They’re basically the best you can expect from a mid-range phone. The Redmi Note 5 Pro also comes equipped with the same SoC. Albeit, the Xiaomi smartphone also starts at Rs 13,999 for the base model.

To be fair, hardware alone is enough to make a phone worth its value. It’s about how well the software is optimized for that hardware. The Zenfone Max Pro M1, though not a part of Android One, runs on Stock Android.

Gaming is a breeze no matter the game that you play. The best part is, that you don’t run out of battery when you’re binge gaming the whole night. The 5000mAh battery really does last for the longest time and doesn’t take too long to recharge either.

Under constant gaming and messaging the phone lasted almost 48 hours and the recharge time for going from 20% to 100% was around an hour. Who doesn’t love a phone that charges quickly?

Even the screen doesn’t disappoint in its Full HD glory. Although the colors are bright, there are visibility issues under the sun.

Have you ever been so impressed with a device and then suddenly noticed something that will change things forever? Well, such is the case with the Zenfone Max Pro M1’s camera.

The camera starts to lag when you put on the beauty mode and the auto-focus (AF) on the camera is incredibly slow. Move a nanometer and the camera will catch the instability.

In their defense, the company has said they are yet to roll out an update for the camera that should fix a lot of issues.

Now about the photos themselves. The colors are drab, the edges at ill-defined and the so-called ‘Bokeh’ effect doesn’t know where to focus and where to blur. The camera doesn’t handle exposure well either with the bright spots melding into white and dark spots losing all detail.

So it’s as simple as that. The phone in itself is spectacular. If you don’t care about the camera, then you’re not going to get a better phone than the Asus Max Pro M1 at this price range. But then again, the camera has become an important extension for all of us. It’s easier said than done to compromise on a feature that integral.