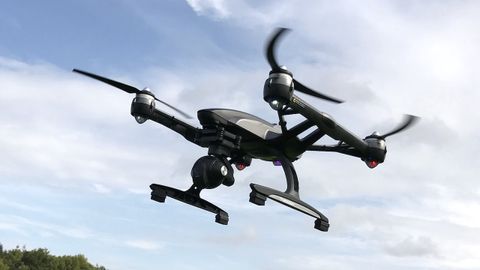 It may be cheaper than the competition, and lack that premium feel, but the Yuneec Typhoon Q500 4K has talent where it counts. Its 4K video capture is excellent, while the bundled ST10+ Personal Ground Station controller scores over its rivals thanks to the inclusion of a touchscreen. Battery life could be better, but for less than £1,000 you'll be hard-pushed to find a better drone than this.

There was a time when the idea of getting a 4K-ready drone for a price that didn't require you to remortgage your home was the stuff of a madman's dreams, but the rapid advancement of this particular field of gadgetry means such opulence is now well within the grasp of even casual aerial photographers.

Drones like the Yuneec Typhoon Q500 4K are paving the way for a low-cost revolution by offering professional-standard video recording that doesn't cost the earth. The Q500 4K captures excellent footage, comes with a wide range of extras and is easy to get in the air – and it offers all of this for a fraction of the cost of its more famous rivals – with some caveats, of course.

If you're shopping on a budget it's possible to order the most basic Q500 4K package from as little as $700, but the more feature-rich bundle – which includes a robust flight case and other goodies – retails for around $800 direct from the manufacturer. If you're in the UK you can expect an almost like-for-like conversion on price, although some retailers are selling the bigger bundle for less than £700.

Unlike some of its more expensive rivals, the Typhoon Q500 4K has a lightweight plastic chassis to keep costs down. This means the drone is more likely to incur serious damage in a collision, but for those shopping on a tight budget the trade-off is likely to be acceptable.

The top half of the drone is dominated by its four rotors, while the 4K gimbal-mounted camera sits directly underneath. Batteries are loaded into a compartment on the rear of the unit, and two helicopter-style skids protrude from the bottom, complete with soft foam pads to ensure a comfortable landing.

There are five lights on the Q500 4K – one on the underside of each rotor, with a fifth light on the rear so you can see which way the drone is facing when it's in the distance.

Because Yuneec has opted for a largely plastic build as opposed to metal or carbon fiber, the Typhoon Q500 4K is astonishingly light – especially when compared to the likes of the DJI Inspire 2, which is of a similar size.

However, it's clear that Yuneec's offering isn't going to perform as well in a straight fight with a brick wall or tree. While we mercifully avoided any serious bumps during our review period, we dread to think what a high-speed collision could do to those plastic arms; with a little pressure it's possible to flex them quite dramatically, which would hint at a drone that isn't designed to withstand excessive force.

Thankfully, once it's up in the air such issues are largely forgotten; the Typhoon 4K proves to be an agile and responsive drone that's a joy to control, thanks to the bundled ST10+ Personal Ground Station controller. Festooned with buttons and boasting two incredibly precise analog sticks, the Android-based controller presents a drone's-eye view of the action via its 5.5-inch touchscreen, while flashing up important information during flight.

Unlike so many other expensive drones on the market, this controller features a built-in screen so you don't have to tether your smartphone to the device; the result is a much more elegant solution, albeit one which requires a massive amount of time to fully recharge – our ST10+ was connected to the wall socket for around four hours before it was totally topped up.

With user-friendliness in mind, Yuneec has even gone so far as to include an SD card, which contains the user manual and some informative videos which not only show you how to unbox the unit, but how to charge it, how to install the props and how its flight modes and features work.

The lightweight frame of the Q500 4K provides decent stability when in the air, although it's not quite as rock-solid as some of DJI's top-line offerings. Even a light wind is enough to cause the drone to wobble, but thankfully the footage captured by the gimbal-mounted camera isn't affected.

The drone's built-in GPS system means it can hover on the spot for prolonged periods without drifting, while the autonomous modes – such as 'Follow Me' and 'Watch Me' – are easy to activate, and take some of the effort out of flying.

Follow Me does exactly as you'd expect: the drone automatically tracks the position of the ST10+ controller, while Watch Me fixes the drone's camera on the pilot, irrespective of where it's flying.

Both modes performed superbly, but it's worth noting that unlike more expensive drones, the Q500 4K lacks sophisticated collision-avoidance systems. It maintains a safe distance between itself and the person controlling it, but will happily smash into other nearby objects if you're not careful on those controls.

The Typhoon Q500 4K comes with two 5400mAh batteries, each of which offers around 20 to 25 minutes of flight time, depending on what activities you're engaged in – using the autonomous modes will drain the battery quicker than simply controlling it manually, for example.

The battery has to be physically removed from the back of the drone in order to charge it, and charging time clocks in at around two hours, which makes the fact that you get two batteries in the more expensive bundle quite a bonus – it means you're getting as much as 50 minutes of flight time when you venture out into the field, and it's even possible to plug the battery charger into your car's cigarette lighter for topping-up on the road.

1080p might have been a big deal in the world of drone-based photography a few years back, but now it's all about 4K. The Yuneec Typhoon Q500 4K can manage ultra-high definition video at 30 frames per second, but if you're willing to take a drop in quality you can record 1080p at 60fps, as well as capture slow-motion footage at a whopping 120fps.

The drone's CGO3 camera is mounted on a 3-axis gimbal, and boasts a 115-degree field of view, with the resultant footage impressively free from distortion or warping around the edges. The only negative we experienced was a weird effect around the sides of the picture when shooting directly into the sun, although we have to admit we didn't have the bundled UV filter installed.

Photographs are equally impressive thanks to the 12-megapixel sensor, and because there are dedicated buttons on the ST10+ controller, alternating between video and still image capture is a breeze.

For such a reasonable price, the Yuneec Typhoon Q500 4K really does pack in a lot of features. The 4K video footage is excellent – even if it's not 60 frames per second – and the ability to effortlessly switch to 1080p slow-motion capture allows even the most inexperienced of flyers to record some amazing footage.

The autonomous modes are easy to master, while the bundled ST10+ controller's built-in screen is something of a rarity, even in high-end drones. Finally, the Q500 4K is agile and responsive in the air, making it fun to fly.

If you're used to drones that feel like they could withstand a direct hit from a bazooka then the Typhoon Q500 4K might seem a bit flimsy and cheap; the body is almost entirely plastic, and we're not sure it would survive a full-speed collision with the branches of a tree, let alone something more solid.

The drone's lack of advanced object avoidance systems means you need to be quite careful in busy or built-up areas, and it's also a shame that the battery lasts, on average, for only around 20 minutes, and takes so long to fully top-up.

The Yuneec Typhoon 4K may not have as many features as some of the leading drones on the market, but its lower price point will be particularly attractive for novice aerial photographers.

While the plastic bodywork is off-putting, there are plenty of positives here, including the superb ST10+ controller with its built-in screen, superb image quality and above-average maneuverability and responsiveness.