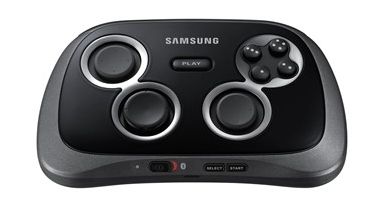 All power - but not enough precision

Remember the Samsung GamePad? The thing that was announced all the way back in March 2013 but never materialised? Well, it's back, it's changed colour and we've run our fingers all over the new version.

There are many stark differences with this new polished unit from Samsung - namely, the millions (well, three) joystick / d-pads that adorn the front.

Two analogue sticks promise easy use for first person shooters, and the d-pad gives reassurance that you'll be able to pull off those more complex special moves in fighting games.

Samsung has gone all out with the new GamePad, with trigger buttons, a selection of input keys, a 'play' button to instantly get to the mobile gaming section and a generally better-packaged offering.

The extendable support for the phone is impressive too, with holding the phone in strongly and not giving that heart-stopping wiggle that makes you anxious to rigidly play games over a pile of pillows.

It also allows you to connect to a TV, either through MHL or screen mirroring, theoretically making your powerful little phone into a console to rival the likes of the GameStick.

However, this is the point where things come unstuck - it quickly became apparent during testing that using any Android 4.3-enabled device with this controller isn't going to be a pleasant experience.

Any game (I favoured Sonic the Hedgehog 4 because I really impressed the Samsung engineer with my skills last year - real highlight) shows a huge degree of lag; not only that, but it appears the amount of latency between controller and screen will change, so you can't even feel any consistency.

This was present in the first iteration of the device, and it's maddening that Samsung hasn't fixed it still, especially when dedicated cheap Android consoles have managed the trick.

However, it's a better experience when you use the GamePad to play games on the move, with the latency not an issue when connected by Bluetooth.

Games run fluidly on the top-end hardware Samsung is cranking out, and the ability to use other phones in the dock is welcome - it's important that devices like this have a wide appeal.

The quality of the controller was unimpressive though. The main joystick on the left-hand side of the device was 'crunchy' and made it hard to smoothly transition through worlds - I quickly found myself looking to use the d-pad, which is fine for the older titles, but today's FPS titles need fluidity.

When you consider that the GamePad is a hair-raising £80 (around $130) then such things shouldn't be seen. I tried another model and it was slightly better, but the issue was still there, meaning it would be hard to recommend this to a hardcore mobile gamer.

When you consider equivalent controllers like the Moga Pro are half the cost with similar functionality (albeit without NFC for easy pairing) you'll see why Samsung may have a hard sell with this device.

The suite of dedicated titles for the GamePad is a little low and is unlikely to change in the near future to a drastic degree - mobile gaming still needs a lot of work for it to be a viable tool for developers to connect to.

The GamePad is a well-put together piece of technology, but suffers from an inability to stream games well to a larger screen, poor joystick quality and a high price.

It's a cool idea still, and 2014 is clearly going to be the year when we see some real power come along in the mobile gaming controller space - but the GamePad isn't going to be that device.