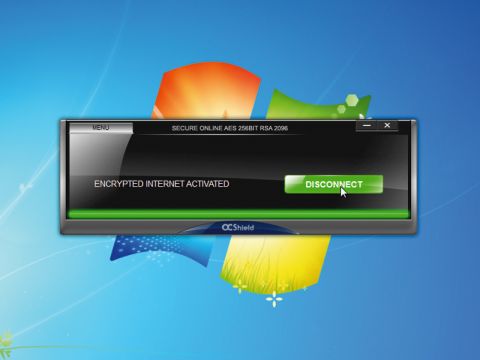 If it causes compatibly issues, you can quickly turn it off

There are several ways to keep your data safe over the internet, but these aren't 100 per cent secure, and there are still gaps that can leave you and your data vulnerable to exploitation by malicious users.

Whereas antivirus and firewall protections kick into effect after an attempted security breach has been detected, which may be too late, OC Shield Encrypted Internet makes your online activity and data invisible and impenetrable as soon as you go online.

OC Shield makes bold promises about what it can do, including eliminating identity fraud and data theft. With OC Shield everything you do online is hidden, but the extra work as your data is encrypted, sent, then unencrypted can have a negative impact on internet speeds.

The effect can vary, with some tests showing a halving of download speeds, yet hardly any impact at another time. For general browsing this might not be noticeable, but for more intensive use the impact is more pronounced.

Sometimes a visit to Google redirected us to the Turkish language version and emails sent via webmail were occasionally returned undelivered. Hopefully these problems will be ironed out.

You can quickly disable OC Shield by clicking 'Disconnect' if it causes problems, though doing so leaves you unprotected.

Before you put your trust in OC Shield, take a look at the terms of service. In it, OC Shield reserves the right to remove and re-allocate its servers without taking any liability for any inconvenience you experience.

OC Shield doesn't have a strict bandwidth limit, but if a subscriber uses more than five per cent of the network's bandwidth, then OC Shield will contact the user with a warning. If this is ignored then traffic shaping and bandwidth capping may be used.

While OC Shield has yet to take this action against any customers you may not be comfortable with giving it this level of control over your internet access.