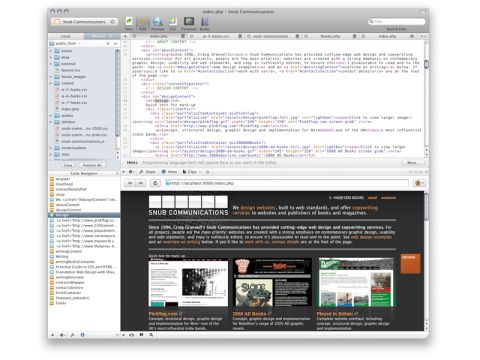 Tantalisingly close to perfection. We await Coda 1.6 with bated breath

A year back, we were critical of Coda, a single-window application for web developers.

We deemed it lacking for professionals, due to its mediocre editing toolset and sluggish performance. Clearly someone was listening, because the changes to Coda1.5 turn the application into an entirely different beast.

Long-time fans will be relieved to hear that the intuitive interface remains largely unchanged. Coda still integrates a site manager, an FTP client, a code editor, menu-based CSS tools, a website preview and Terminal, and the main pane can be split horizontally or vertically.

What has changed is that the app feels significantly faster than version 1.0, while using the Edit pane is a much improved experience.

It's still not perfect – key-bindings to HTML elements remain absent, as does code-folding – but the enhanced Clips window now enables clips to be grouped into categories, and tab triggers in tandem with Coda's already impressive auto-complete ensure that rapid hand-coding is straightforward. We're also happy to see mixed-syntax modes implemented, ensuring accurate code colouring when one language is nested in another.

Elsewhere, changes vary from the major (source control via Subversion, and multi-file Search and Replace) to the minor (tab status icons that detail whether a file is local or remote), and they all add up to make Coda the app it should have been when first released.

It won't quite replace all your existing tools, but Coda will provide a streamlined and efficient environment for the bulk of your work.