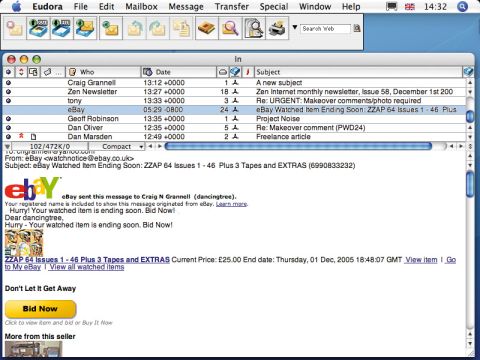 Opening up Eudora is like stepping back in time. If it weren't for the Aqua interface elements, this email client wouldn't feel out of place back in the mid 1990s, rubbing shoulders with Claris Emailer and Outlook Express.

However, despite the fact that it looks like QUALCOMM hasn't updated it in years, that's not the case: the current version of Eudora is actually fairly featurerich.

If you can deal with the outdated interface, you'll find the application fast and reasonably efficient; its spam filtering tools are also of a decent quality; and it even has a few unique tricks, such as the intriguing 'Mood Watch', which searches the content of your email for questionable and offensive language, alerting you to messages that contain things that should perhaps be edited.

There is a downside to all these features, though, and that's complexity. Many of the options to drive its features are hidden away, so most users will probably never discover them. The application is also hampered by its inadequate Filters dialog, which only enables you to define two match items and a limited number of actions per filter - all rather limited when compared to the options available in most of the other applications featured in this Group Test.

Even more important than the program's faults and quirks is the gut feeling we get that the application's days are numbered - the current Eudora release for Mac OS X lags behind the Windows version (which is now on version 7).

It's also worth noting that the free version of the application is limited (as is the ad-ridden 'sponsored' version), so you can only try its full feature set by splashing out nearly $50; but when there are superior free clients available for the Mac, why bother?