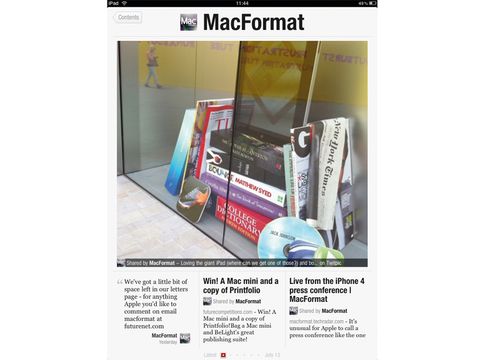 If you are looking for a way to customise info from various web sources, then Flipboard might suit

The industry has been working itself into a lather about the idea of personalised newspapers and magazines for so long that it's frankly rather surprising it's taken this long to come up with something that's more than just a series of concept sketches.

Yet while Flipboard is imperfect (and certainly won't supplant more traditional media delivery systems such as RSS, nor be a good idea for everyone) it's fascinating, fun and free.

It hooks into feeds of information and pulls it out – some preset, some added yourself from Twitter names and lists (the 'personal' bit comes from the fact that it'll scrape information from your Facebook and Twitter streams).

If a friend tweets a link to an article, for example, it will present the article headline itself, with a small subhead telling you who shared it; tap the headline and you can see the context of the link in the original tweet or Facebook message, and read the first part of the article.

You need to tap into the source site in an embedded browser to read the full thing though. It's a similar thing with pictures on Facebook and popular hosting services on Twitter; Flipboard follows the link, scrapes the picture, and presents it.

You can 'like' an article you see, send it on or see activity around it; replies to Facebook postings show alongside, though this comments box only seems to show a welter of old-style retweets for Twitter stories, rather than replies.

Flipboard shows a lot of promise, but it's just not quite there yet.