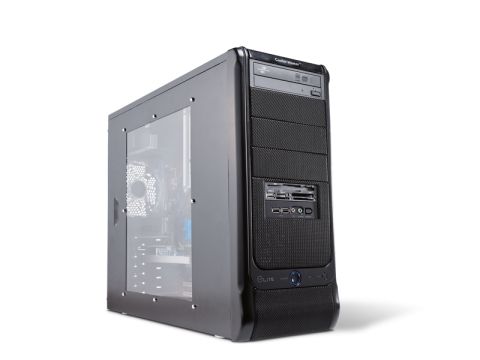 Offers performance not far short of some £1,000 rigs for half the price. Impressive

This Unleashed rig from AdvanceTec takes the random nature of what you can get from your chips out of the equation, doing all the hard work for you.

You see, from the quad-cores at the top of the Phenom II CPU tree down to the low-end, dual-cores, AMD essentially use the same chips. Sometimes particular cores are locked down for a reason, such as faulty/ corrupt silicon, but sometimes this is done just to create dual-or triple-core chips.

This means that in this particular CPU lottery you could end up picking a dual-core CPU and find yourself with a shiny quad-core chip lurking under the heat-dissipation plate.

What AdvanceTec has done is to handpick the processors and the ones which can be unlocked are then slotted into its Unleashed series. The is a slight premium in terms of the labour charge, but to get an equivalent out-of-the-box quad-core into this rig would cost you close to £70 more.

Here you've got a chip running with all four cores unlocked and all running stably at 3.1GHz. AdvanceTec's technical advisor assured us he could have overclocked the chip too if only one core had been unlocked.

But a quad-core Phenom II running at 3.1GHz is nothing to be sniffed at, and the rest of the components in this £550 machine ably back it up.

Indeed, the mixture of AM3 board, Win7 64-bit and a 1,000W+ PSU means that there's a fair amount of future-proofing built into this PC too. When you can, drop in a few more gigs of RAM, a better GPU and this machine will fly.

It's no slouch at the moment either, hitting thoroughly playable frame rates, on maximum settings, in both DiRT 2 and Far Cry 2 at the eye-watering resolution of 2,560 x 1,600.

Neither of these take much of a hit with the extra cores turned off though, showing what a quality CPU the X2 550 is, but in seriously intensive CPU schtick the extra matters. In Cinebench it was over a minute faster and in ArmA 2, 30 per cent quicker.

While a lot of our attention has been focused on the £1,000 P55 rigs, our £340 machine last month and this li'l beauty show that you don't need to bust your bank account for a decent gaming setup these days.