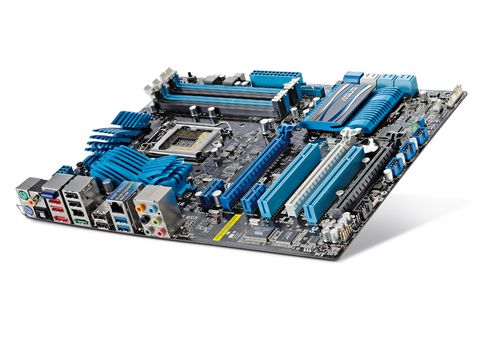 The new and improved B3 chipset motherboard

Capital performance and features, but the B3 revision shouldn't cost this much more.

For those that have kept up with the motherboard scene lately, the release of the Asus P8P67 Pro might look like old news. It was in fact originally released in January, in parallel with Intel's Sandy Bridge chips hitting the market.

On release it seemed a pretty solid socket 1155 board to pair with the new range of CPUs, but then Intel went and announced "technical issues" with its 6-series chipset (codenamed Cougar Point), which affected SATA II ports and caused long-term degradation of SATA devices. Cue massive recall, widespread pandemonium, skies turning a deep crimson and the dead walking the earth... Alright, just the recall. But still.

The Asus P8P67 Pro B3 is technically an issue-proof motherboard. The 'B3' refers to the chipset revision. It offers the exact same features of the original P8P67 Pro, only the SATA issue is fixed. Why the devil then, is it so much more expensive now?

The mark-up of B3 boards extends beyond Asus to just about any manufacturer with a socket 1155 board on the market. It's not right to point fingers without being able to establish who initiated it, but at a consumer level it's plain unfair.

Soapbox time over. It's sturdy enough, supports four-way discrete GPU arrays and a huge chunk of RAM without making too much of a fuss of its visual design. No zany heatsink designs here, just diligent cooling.

Super-fast connectors of the USB 3.0 and SATA 6Gbps variety are available if not abundant, sporting four of the former and two of the latter. In short, it has all the features you'd expect from a sub-£200 board. There are a few pleasing extras, though.

The P8P67 Pro's settings aren't quite as comprehensive as its big brother the Maximus IV Extreme, but there are sufficient overclocking options to squeeze a large glass of extra performance juice from your CPU, either by tweaking global multiplier settings or through Turbo ratios (if you have an unlocked K series chip).

Asus's Maximus IV Extreme RoG is a fine board, if a bit of a mouthful. Little brother P8P67 Pro B3 is, as little brothers so often are, keen to mimic big bro's performances.

Considering the price difference, it comes damn close. These figures are stock. Overclocked, it comes even closer.

We were able to run our 2600K at a stable 4.5GHz with the Pro B3, which is commendable for this end of the price spectrum.

The Bluetooth receiver is a nice touch too, allowing remote overclocking via your smartphone or tablet. Value for money, then, is the premium consideration here, albeit with a few perks. If we ignore that earlier rant about the B3 revision mark-up, this board delivers truckloads of the stuff.

Performance is comparable to the flagship Maximus IV in terms of CPU grunt and gaming, and there's a huge wad of cash separating the two.

Unfortunately, the inflated price means we can't quite recommend this as much as we'd like to. With the imminent release of Z68 chipsets that offer the best of both current H67 and P67 boards, it makes more sense to hold out a bit longer before buying the ideal home for your Sandy Bridge chip.