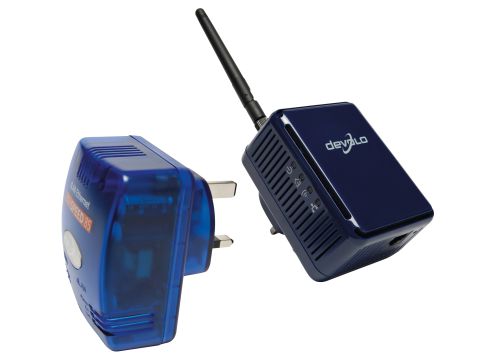 The price is on the high side, but it's still a useful addition to your home networking setup

This is something we've been hoping Devolo would release for an age now. Having played around with the company's HomePlug stuff before, we know that its solutions offer quality connections, but the ability to extend wireless coverage just strikes us as something that should have happened before now.

This works exactly as you would expect. Connect the standard dLAN plug next to your router and then plug the other into a socket that isn't covered by your normal access point. Next, you'll need to set up the connection and the Wireless Extender using the web-based interface, and you're good to go.

The actual connection between the two plugs is limited to 85Mbps, although as this is a 802.11g device, that's well over the limit of 54Mbps anyway. In testing we were maxing out at 10Mbps when copying from the network, but this is more than enough for sharing your internet connection to the harder to reach areas of your house.

It's a fair whack of cash mind, and there are cheaper options available, but the units are well built, and the connection wasn't affected by turning other mains devices on and off, which can be a problem that affects other brands.