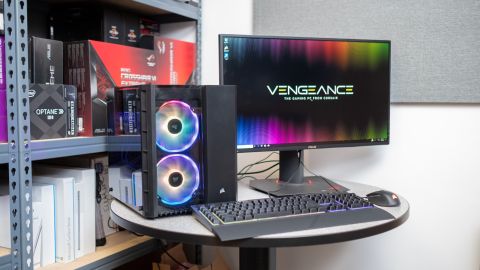 Except for a generation older, non-unlocked processor and an USB Wi-Fi adapter, the Corsair Vengeance Gaming PC is almost perfect. It’s a gorgeous, potently powerful and easy to upgrade rig.

Not too long ago, we were surprised that Corsair got into the pre-built PC space with its Corsair One system. Now, the company is angling towards becoming a PC builder, like Origin and Digital Storm. Meet its newest battle-ready frag box, the Corsair Vengeance Gaming PC.

Whereas the Corsair One featured a custom design and liquid-cooling solutions to be as compact as possible, the Vengeance Gaming PC is a larger Micro ATX system that sticks to using standard PC parts.

There’s not a single no-name PC component here, but rather a collection of Corsair parts (unsurprisingly) and the latest computing hardware that amounts to one of the most powerful and most easily upgraded pre-built gaming PCs we’ve reviewed to date.

Here is the Corsair Vengeance Gaming PC configuration sent to TechRadar for review:

As specced to this configuration on the right, the Corsair Vengeance Gaming PC costs a cool $2,399 (about £1,840, AU$3,325). For your money, you get an almost completely modern rig featuring an Nvidia RTX 2080 as well as ample storage and memory capacity.

The price above also factors in the cost of the included Corsair K55 RGB Gaming Keyboard and Harpoon RGB gaming mouse. One oddity about the Vengeance Gaming PC is that the motherboard Corsair chose to use doesn’t come with built-in Wi-Fi. Instead, you’ll get an Netgear AC Wi-Fi USB module included in the box.

Unfortunately, this configuration is the only one Corsair plans to release for the time being, so you’ll have to upgrade it yourself if you want more storage, memory or a newer Coffee Lake Refresh processor.

One of the Vengeance Gaming PC’s newest rivals sporting 9th generation Intel chips include the $3,299 or £2,499 (about AU$4,520) Asus ROG Strix GL12CX. This Asus gaming PC comes fitted with an Intel Core i7-9700K (essentially the 8700K successor) along with the same GPU and memory capacity, but only 256GB of SSD storage space. The one silver lining of the GL12CX’s extreme price tag is it also factors in the cost of a bundled ROG Strix Flare keyboard and ROG Gladius II mouse.

Another big competitor is the $2,299 (about £1,800, AU$3,150) MSI Trident X that features an Intel Core i7-9700K, Nvidia RTX 2080, 16GB of RAM and 256GB SSD – mirroring the specs of the Asus ROG Strix GL12CX perfectly at a much lower price. Unlike both the Corsair Vengeance Gaming PC and Asus ROG Strix GL12CX, the MSI Trident X doesn’t come with an included keyboard or mouse which would have easily put its price on par with the Asus model.

Just for the sake of comparison, we tallied up the cost of building this PC ourselves, and the amount you’ll save by going the DIY route is only about $300/£300. Of course, part of the higher price comes from labor – which, we have to say has produced an excellently clean PC build – and a two-year system warranty that covers parts and labor with 24/7 customer service.

Unsurprisingly, the Corsair Vengeance Gaming PC is built around a Corsair PC case:  the Crystal Series 280X RGB to be exact. This Micro ATX case is arguably one of the best PC cases of the year, as it’s gorgeous, compact and very versatile. Despite its compact size, it can support a full-sized ATX power supply, graphics cards of all lengths, two hard drives and three SSDs.

There’s plenty of eye candy to gawk at on this PC case as well. Thanks to it having tempered glass panels on three sides, you can look clear through to see its four RGB fans, RGB memory and RGB CPU cooler – all unsurprisingly made by Corsair – shining in all their glory.

Compared to the usual pre-built chassis we’re used to seeing from major manufacturers and boutique PC builders, the Vengeance Gaming PC looks and feels like its years ahead of the curve. Of course, this should come as no surprise when Corsair has been designing PC cases for nearly a decade now – but it still feels like Corsair is almost cheating at this point.

Of course, the Corsair Vengeance Gaming PC isn’t just nice to look at – it’s also easy to upgrade. Pretty much every part of this PC, except the motherboard, is anchored down by thumb screws. Meanwhile, all those slots for hard drives and SSDs we mentioned earlier utilize tool-less drive sleds as well.

The dual chamber design of the Corsair Vengeance Gaming PC also makes cable management a cinch as it basically requires none of it. You can pack all the cables into the side compartment of the chassis and never see a mess spill into the main section. But, if you’re more of a perfectionist or want to try your hand at cable management for the first time, you couldn’t ask for a computer chassis with more tie downs.

Here’s how the Corsair Vengeance Gaming PC performed in our suite of benchmark tests:

Despite running with a now generation-old processor, the Corsair Vengeance Gaming PC holds its own against machines running with Intel Coffee Lake Refresh processors.

The slightly cheaper MSI Trident X, equipped with an Intel Core i7-9700K and Nvidia RTX 2080, without a doubt runs faster. In processor specific tests, like GeekBench and Cinebench, this gaming desktop racks up a slightly higher 27,594 and 1,470 points, respectively, in multi-core benchmarks.

Unfortunately, the Vengeance Gaming PC falters a little farther back when it comes to productivity and gaming, as these new 9th Generation processors can squeeze out a little more of Nvidia’s new RTX graphics cards. The MSI Trident X was able to achieve a PC Mark score of 5,566 points, while running Total War: Warhammer II on 1080p Ultra settings at a slightly higher 82 fps.

The $3,799 or £2,999 (about AU$5,200) Asus ROG Strix GL12CX equipped with an Intel Core i9-9900K and Nvidia RTX 2080 outclasses the Corsair Vengeance Gaming PC even more. In our testing, this top-of-the line Asus rig delivers Cinebench scores almost 700 points higher in Cinebench and nearly 10,000 points higher in GeekBench multi-core. With gaming, the ROG Strix GL12CX doesn’t pull off such an impressive lead, only gaining an extra few frames over the Vengeance Gaming PC.

Outside of benchmarks, Corsair’s new mean machine is ready to tackle all modern games. We are able to play Hitman 2, Darksiders 3 and Battlefield V in 4K and Ultra quality settings at a relatively steady 60 fps with this PC.

The Corsair Vengeance Gaming PC is one of the best pre-built rigs we’ve reviewed this year. Its beauty is unmatched, the build quality is impeccable and it comes at a great price for the parts inside. It’s no performance slouch either, keeping up with the latest gaming PCs despite its slightly older processor. The Vengeance Gaming PC runs the latest titles at 4K and maximum visual fidelity at silky smooth frame rates.

Whereas this Corsair machine comes at a great price, the MSI Trident X makes for an even better value prospect, as it serves up an Intel Core i7-9700K gaming desktop that’s noticeably more powerful. If you factor in the peripherals for MSI’s gaming rig, it loses its lower price advantage. However, it’s ultimately the machine to get for the best performance – at least for now anyway.

We have no doubt that Corsair will upgrade its gaming PC with the latest Intel 9th Generation processors that will help eliminate its performance gap. The Vengeance Gaming PC is a fantastic base that utilizes one of the best PC cases in the industry, and it’s infinitely more upgradable than any other pre-built PC we’ve reviewed before.