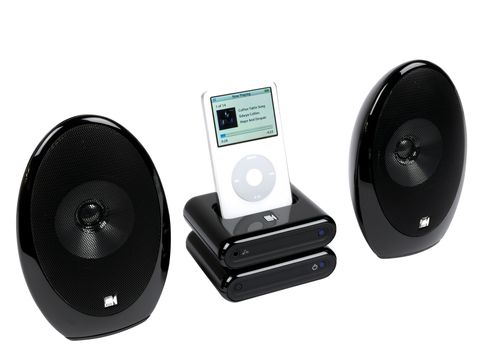 The bitrate that your iPod music is encoded in will decide how much, of course, but the Picoforte One - an even meatier Picoforte Three model is also available - offers some serious all-round power.

Back to the egg

The dock and the amp themselves are made of die-cast zinc and although a mess of cables needed to attach each component to one another will need to be carefully shielded from view, it's a simple process to connect the dock to the amp and the amp to the speakers - especially since all cables are provided. Maximum appeal comes by dint of nine iPod cradles, which cover every single iPod we could think of.

If you've an iPod Video/Photo this dock might be worth considering because the dock can be attached to a TV using a S-video cable, although that isn't included. It's a great feature if you've encoded some DVDs to watch on-the-go.

Precise with a wide frequency range, its 25W speakers bring out impressive detail from Gruff Rhys' Candylion long-player, encoded at 192 kbps. Attach a subwoofer to the amp's dedicated output and you'll have one of the best iPod hi-fi's around, although its cable-tastic appearance and high price do narrow its appeal.